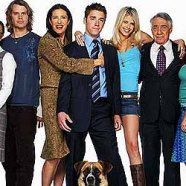 I am a fan of the underdog. The contender that the audience does not believe in. One of my favorite television underdogs is The Loop.

The Loop is an American sitcom that ran from 2006 to 2007 on Fox. The show starred Bret Harrison as a young professional balancing his social life with the pressures of working at TransAlliance Airways, a major U.S. airline.

As we reach our early 20s and face the daunting challenges of real life, there are those who choose to embark on a career path and those who’d rather goof off with pals. And then, every so often, there’s someone who sets out to do both.

The Loop is something that you see about once every 10 years. It’s a quirky, funny, and realistic. Check it out on Hulu.

Like Loading...
← Gay Life During the Height of the HIV / AIDS Epidemic What Your Zip Code Says About You →