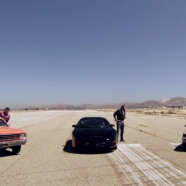 Battle of the Hollywood Cars – DeLorean vs KITT vs General Lee

Tanner, Rutledge and Adam construct replicas of their favorite Hollywood cars (Tanner: a Nissan 200SX disguised as the DeLorean time machine from the Back to the Future films; Rutledge: a 1995 Pontiac Trans Am disguised as KITT, from KnightRider; Adam: a 1973 Plymouth Duster disguised as The General Lee, from The Dukes of Hazzard) and put them to task, starting with a speed test. Can any of them reach the legendary 88mph!?!

Like Loading...
← PSA of the Day: Please Microchip Your Pets A Radical Plan to Eliminate Dog-Friendly Areas in SF →