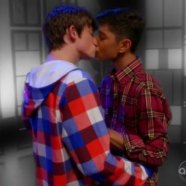 One of the best story lines in the television series “Ugly Betty” was the story between Justin and Austin. Justin is Betty Suarez’s brother and – over the series’ four years – it becomes more apparent that he is gay.

In the final set of episodes, he meets Austin and the two fall in love. I am posting a series of clips of how the two met, fell in love, and eventually got together.