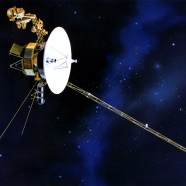 NASA’s Voyager 1 spacecraft captured these sounds of interstellar space. Voyager 1’s plasma wave instrument detected the vibrations of dense interstellar plasma, or ionized gas, from October to November 2012 and April to May 2013.

The soundtrack reproduces the amplitude and frequency of the plasma waves as “heard” by Voyager 1. The waves detected by the instrument antennas can be simply amplified and played through a speaker. These frequencies are within the range heard by human ears.

Scientists noticed that each occurrence involved a rising tone. The dashed line indicates that the rising tones follow the same slope. This means a continuously increasing density.

When scientists extrapolated this line even further back in time (not shown), they deduced that Voyager 1 first encountered interstellar plasma in August 2012.

The Voyager spacecraft were built and continue to be operated by NASA’s Jet Propulsion Laboratory, in Pasadena, Calif. Caltech manages JPL for NASA. The Voyager missions are a part of NASA’s Heliophysics System Observatory, sponsored by the Heliophysics Division of the Science Mission Directorate at NASA Headquarters in Washington.

Like Loading...
← The Unofficial Goldman Sachs Guide To Being A Man “Ugly Betty”: Justin and Austin the Full Story →