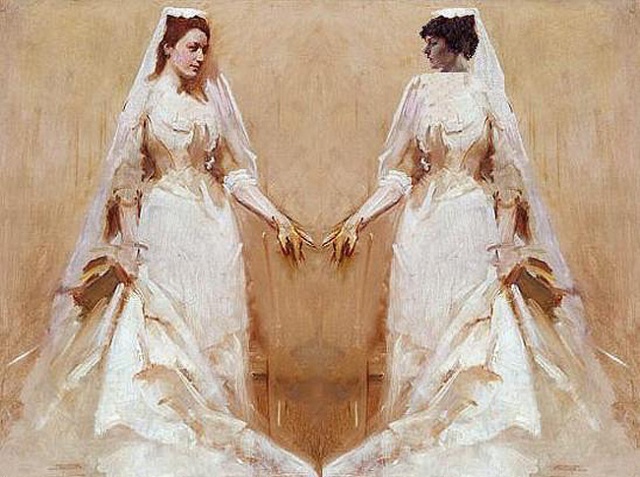 Weeks after same-sex marriage became legal in Maryland, a wedding expo was held in the Tremont hotel in downtown Baltimore. In a pair of packed ballrooms, ABBA was playing—”Take a Chance on Me,” of course—and vendors were vying for this new marital demographic. Beckoning from tables were caterers, DJs, wedding planners, limo services, B and B proprietors, stationers, photographers, florists. A travel agency invited couples to consider shipboard ceremonies, after which they could shoo guests on shore and embark on a honeymoon cruise. A stilt walker and balloon-twister worked the crowd; the balloons, naturally, came in rainbow colors.

Scores of couples wandered through the displays, snacking canapés and savoring decisions many, growing up, had never expected to be allowed to make. Afternoon or evening? Big or small? Dress or tux? Cakes were everywhere: tiered confections iced in lavender and silver and daffodil yellow. Couples considered what traditions they would reject, and what traditions they would embrace. Among them was a woman named Melissa, so thrilled to be a bride that she was planning to take the last name of her fiancée. “In the lesbian community, lots of people are changing their name,” said Sheila Alexander-Reid, strolling with her soon-to-be-spouse, Deborah Cummings-Thomas. Both women are officiants and have facilitated same-sex weddings in Washington, D.C., since they became legal in 2010.

Cummings-Thomas said many couples who travel to the D.C. area to marry are from states that ban same-sex marriage. Returning home, they find that “being able to change their name is a way to have their home state recognize their marriage,” in spirit if not in fact. For their own part, the two women had shown up at the courthouse early, the first same-sex couple to get a license in Howard County, Maryland. They were planning to share a name: They just had to figure out which one. Probably Reid, they were thinking.

The decision to take the same surname is one way same-sex couples are rehabilitating—repurposing, you might say—some of the most ancient marital traditions. Name-change dates back to the common-law doctrine of “coverture,” when a bride assumed her husband’s name and legal identity and, in what is called “civil death,” ceased to exist as a separate legal person. Feminism inspired some women to reject this tradition—about 10 percent of women, according to studies, decline to take their husband’s surname—taking a stand for autonomy but contributing to a world in which teachers are sometimes unsure which children belong to which parents, and the generation who grew up with hyphenated names must decide whether to exponentially burden their own offspring. In embracing the standard option, same-sex couples are lending it a new, radicalized flavor. Not only lesbian brides but some gay grooms change their names; whether this will pave the way for straight men remains to be seen. Name-changing may turn out to be something men do when partnering with men, but not when partnering with women. The number of straight men who change their name upon marriage, remains so tiny as to be imperceptible.

Lesbians also have to come to terms with “wife,” a word that for many remains ideologically burdened

“For us it was about being a family,” says Bev Uhlenhake, who lives with her wife, Sue, near Bangor, Maine. The women have three children, conceived by sperm donor and carried by Bev. To make it clear they have equal parental status, Bev was inclined to let Sue’s be the family surname. But there was one problem: Bev is tall—6′ 2″—and Sue’s maiden name was Teeney. There was no way Bev was going to go through the rest of her life fielding height jokes, or subject their kids, already “taller than your average bear” to that playground torture.

“I know there’s a lot more altruistic reasons for taking one name over the other, but that’s why we made the decision,” said Bev. “I had been hoping and praying since I was old enough to spell my last name that I would marry someone with the last name of Smith. But that didn’t happen.”

Lesbians also have to come to terms with “wife,” a word that for many women remains ideologically burdened. The fear that one will “dwindle into a wife” was memorably articulated by the character Millamant in William Congreve’s Restoration comedy The Way of the World. Lisa Ward, a town councilor in Maine, all her life associated the word with helplessness and dependence. “I didn’t want to be called a wife—that means somebody takes care of me and I couldn’t take care of myself,” said Ward, chatting one afternoon in a municipal office down the hall from the clerk who issued her marriage license. “When I was younger, I remember my mother saying: ‘I want you to find a good man to take care of you. I know you’ll be a great wife.’ And I’m like: ‘I don’t need anybody to take care of me.'” But now she thinks of her wife, Mel Cloutier, as “the person who loves me more than any other person—I don’t think of it as the person who has certain duties or responsibilities. My wife is the person I love more than anyone. If I need to take care of her, I will; and if she needs to take care of me, I know she will.”

Gay men, too, have mixed feelings about “husband.” Some see it as too mainstream—belonging to a world that long tried to exclude them. Others enjoy using it. Among these is the photographer and documentary filmmaker David Evans, who lives in Washington, D.C., with his husband, Sangkyun Shon (Sam), who works as a supervising editor at Discovery Channel. The two met on an Internet dating site. For David it was love at first sight, and he coaxed Sam into living as a gay man in a public way. “I’ve hidden my identity all my life,” says Sam, who is Korean and grew up in a highly traditional society. It was an immense leap for him to stand in their wedding ceremony, in front of mostly straight friends and family members, and declare his love. Now that they are married, David makes a point of using “husband.” It’s direct, he says, it’s political, and it packs a punch.

For Sam, the word was at first harder to utter, because its closest Korean translation implies the presence of a wife. If he calls David “husband,” Sam says, he necessarily feels like the wife, who in Korean culture would have less authority and household standing. “I feel that I’m de-masculinized,” he said. For a while, he tried using “partner,” but people usually think this means business partner. Now, he is bringing himself to use “husband” and finding he likes the effect it has.

So the old traditions are turning out to be important for a new set of reasons. “In many cases, gay couples take the entire process more seriously,” suggests wedding planner Sandy Malone. “They want those traditional words. They want the world to say, ‘You’re normal, you’re just like everybody else.”