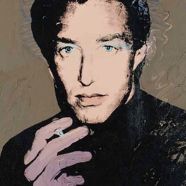 You cannot discuss fashion in the 1970’s without using the word Halston. The decade belonged to the designer.

Warhol referred to the man as ”the art form of the 70’s.”

I am fascinated by Halston with his ability to build an empire. He had minimal, clean designs, made of cashmere and ultrasuede. He dressed Jackie Kennedy at the 1961 presidential inauguration. Halston was bold. Unapologetic.

For a man who stood for decadence, privilege and the good life, I am amazed at how Halston has faded some in the last decade. This gray Sunday morning in San Francisco, I pay homage to the man. And if you have a moment to relive Studio 54, check out his designs at the Metropolitan Museum of Art.