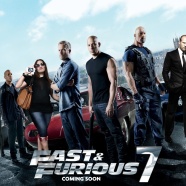 The Furious 7 trailer has posted with insane stunts and an awesome cast. The trailer begins with an opening sequence featuring race cars fly out of an airplane and hit the ground to chase after a semi-trailer.

The film itself picks up where Fast 6 ended. After returning home to America following years on the lam, Vin Diesel’s Dominic Toretto and his “family” are challenged by Jason Statham’s Ian Shaw, the brother of Fast 6 antagonist Owen Shaw and the murderer of longtime Fast & Furious character Han in a post-credits scene in the last film.