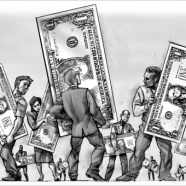 What seems like eternity ago, a shocking video titled Wealth Inequality In America went viral, and swept the internet in a matter of hours. Properly billed as “six and a half minutes that you need to spend,” it depicted in graphic detail how the richest 1% of Americans have amassed 40% percent of the entire nation’s wealth.

This video has been around for a while, but shockingly hasn’t had a similar effect . Created by a group called The Rules, it uses the same modeling as the original video and applies it globally to graphically display how the richest 2% in the world retain OVER HALF THE ENTIRE WORLD’S WEALTH.

Let that sink in, if it can. According to The Rules, the richest 300 people on Earth have AS MUCH WEALTH AS THE POOREST 3 BILLION.

“…The number of people it takes to fill a mid-sized commercial aircraft have more wealth than the populations of India, China, The U.S., and Brazil, combined.”

Like Loading...
← “Sex and the City” on Love The 11 Differences between Dating a Boy and a Man →