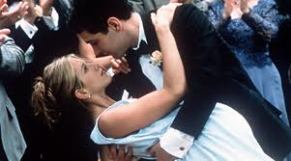 12 Movies Curious Gay Kids Watched In The ’90s
If you were young and figuring yourself out, these were the flicks you paid extra attention to.

We might not have been out in the ’90s — we might not even have realized we were gay — but there were certain movies that captured our attention. For the most part, these weren’t heavy-hitting dramas: it would be another decade before we could fully appreciate films like Philadelphia, for example. But these movies gave us some hint of a life we both craved and feared. Plus, boys kissing: that wasn’t something you saw every day.

“The Object of My Affection”

Nina (Jennifer Aniston) knows her best friend George (Paul Rudd) is gay, but she falls for him, because duh, he’s Paul Rudd. The bond between a gay man and his straight female best friend was appealing: we wanted a close non-sexual relationship like these two had. And we also just wanted Paul Rudd.

Armand (Robin Williams) has to pretend to be straight for his son’s fiancée’s conservative family. His partner Albert (Nathan Lane) does drag as Armand’s wife.The Birdcage made dressing up look fun, but it also reminded us that under some circumstances, being gay was something to hide.

“But I’m a Cheerleader”

When Meg (Nathasha Lyonne) begins to exhibit signs of gayness, her parents send her off to a camp that “cures” homosexuality. We were too young to fully grasp the film’s subversiveness, or to appreciate appearances by RuPaul and Mink Stole. Still, it awakened something in us that would one day be satisfied by John Waters.

Frankie (Nick Scotti) is a struggling actor who ends up living with Warren (Anthony Barrile), a gay man. The two clash but ultimately find a way to accept each other. In addition to teaching us new terms (“Guido” and “GWM”), Kiss Me, Guido showed that straight guys could totally accept their gay friends.

Before The Trevor Project, there was Trevor, a short film about a boy who attempts suicide after realizing he’s gay. They showed it on cable with Ellen DeGeneres directly addressing the audience. Maybe you can relate to Trevor, she suggested, as though she were staring into our souls.

Teacher Howard Brackett (Kevin Kline) is outed by one of his former students, which is strange because Howard isn’t gay. Well, not that he knows of. While In & Out does traffic in stereotypes, it’s mostly harmless. When we first watched the movie, it was just nice to see a gay man figuring himself out, all while making us laugh.

Julianne tries to make her best friend Michael (Dermot Mulroney) jealous by pretending she’s marrying her gay friend George (Rupert Everett). Like The Object of My Affection, My Best Friend’s Wedding gave us a look at that incomparable gay man-straight woman bond. And Rupert Everett made an awesome consolation prize.

Billy (Sean Hayes) finds himself drawn to hunky Gabriel (Brad Rowe), an actor who may or may not be gay. Before the decidedly darker Chuck & Buck, this romcom captured the obsession with the sexually ambiguous hottie, something most of us would encounter in life. And like Billy, we fell hard for Brad Rowe.

Teenager Eric (Chris Stafford) falls for college student Rod (Andersen Gabrych). For a while, it seemed like all gay movies were about coming out — probably because they were. But Edge of Seventeen was formative. Plus, it was our first introduction to Strand Releasing, which produced all the movies we were embarrassed to rent.

“To Wong Foo, Thanks for Everything! Julie Newmar”

A trio of drag queens (Wesley Snipes, John Leguizamo, Patrick Swayze) head out on a cross-country road trip. Priscilla, Queen of the Desert was the drag movie of the ’90s, but this was more mainstream. Our friends’ parents took us before we even understood what drag was.

Jeffrey (Steven Weber) must reconcile his fear of AIDS with his feelings for Steve (Michael T. Weiss), an HIV-positive man. Jeffrey made gay life look fun but also scary — between gay bashing and the AIDS crisis, we worried we’d never really be able to stop being afraid of who we were.

Office temp Gabriel (Christian Campbell) falls for go-go dancer Mark (John Paul Pitoc). Here’s why Trick was educational: it taught us the word “trick,” reminded us that gay life was also sexy and fun, and instilled in many of us an appreciation of Tori Spelling that still has us marathoning 90210.